Skeletons in the Shower

While some people have skeletons in the closet, we house mates like to keep our skeletons where everyone else can see them – namely, in the shower. Yeah, everyone getting down and wet with everyone else’s skeletons; it’s a wild world, baby.

This is our resident skeleton, Marjorie. 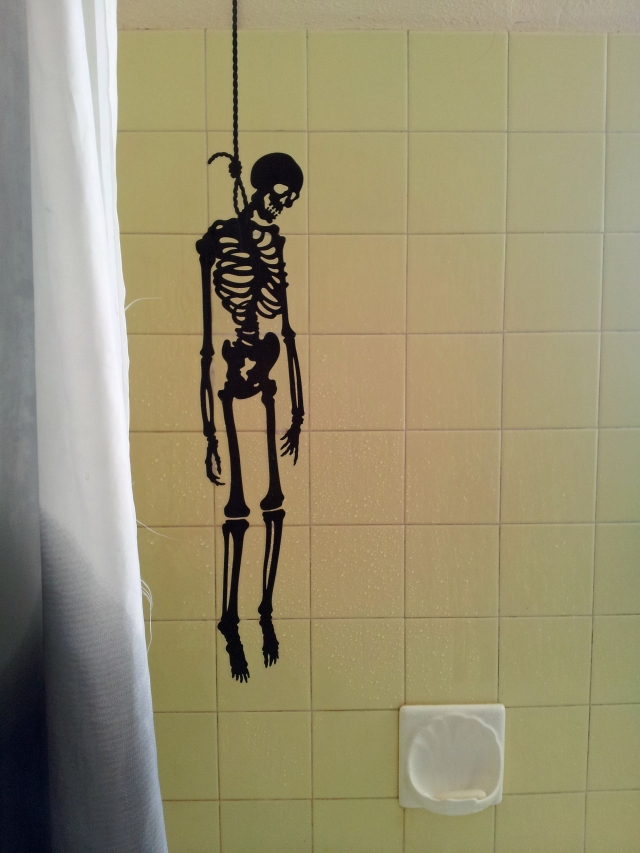 I’m really happy that I took this photo on my last morning in the old apartment, where beyond Marjorie our shower window (of course) had a great view over the Bathurst CBD’s most commercial intersection (exactly what you want to look at in the shower). Although of course the shower window had to be closed after every shower, otherwise the pigeons who live in the Coles ‘e’ would spy an opportunity for somewhere even less opportune to live, and throw themselves into our bathroom.

When Ryan first moved into the apartment, the real estate agent made the fatal mistake of leaving the shower window open. Pigeons had gotten into the bathroom, panicked, and there was shit everywhere. Actual shit, actually everywhere. We managed not to repeat the mistake.

Anyway, by time I got back from Bathurst, a week and a half after this photo was taken, Marjorie was gone. Gone! Dead! Someone had ripped her down and thrown her in the trash as if she was just a – just a – just a $2 Halloween sticker on a bathroom wall.

And that, my friends, is the true skeleton of the redbrick apartment. The secret identity of the cold-hearted murderer who threw out my Marjorie.

Stellar Lasers is currently writing her PhD on Pokemon Physiology. To cover travel costs, she also writes articles for the Sims Big Brother Challenge. Her one weakness is waffles.
View all posts by Stellar Lasers →
This entry was posted in darling and tagged bathurst, hanging, hanging skeleton, inappropriate window, marjorie, pigeon, shower, skeleton. Bookmark the permalink.