I really wish zombies would phase out entirely and we could get onto a new trend, like weregeese or tapirs from the eighth dimension.

Speaking of tapirs. Today we had planned to go hiking in Blackheath. Alas, by time we reached Lithgow the clouds were so heavily banked above the mountains that we turned around and drove (about 300km) to Dubbo instead. The zoo! That’s what we thought we’d do. After all, Western Plains Zoo in Dubbo is kind of like a safari, where all the animals have heaps of room to run around, much more wonderful than the standard zoo.

But what was supposed to be your run of the mill trip to the zoo was not to be. In fact what actually happened was a beautiful balance of poor timing and the best timing imaginable.

By time we had navigated the thorny mire that is Dubbo, it was three pm, and the zoo was two hours from closing time. No fear, says we intrepid explorers of the eighth realm. We bought our tickets and into the zoo, which can be navigated by car, bike, foot, caddy, probably on some sort of mechanical dinosaur if you had the foresight to bring it with you.

Our first stop was the lemurs on Bachelor Island:

Luckily the keeper was also running behind time, so we were in good stead to hear her talk about the lemurs. They’re pretty cute.

They weren’t fond at all of the swamp hens taking their food. One actually went up to the keeper while she was speaking, and tried to pry open the food bucket in her hand (they’d already been fed). When it learnt that wasn’t going to be successful, it disappeared behind her and appeared around head level. So easy to imagine a couple of hairy lemur paws wrapping around her neck, and snap! Quickest way to a free feed.

I guess fortunately for us we missed the lemur-keeper massacre, mainly because our attention was diverted by this excellent turtle;

Well, when the turtle show was over and everyone irrelevant was dead or dismembered, Ryan and I took our walking legs past the rest of the monkeys (really, why don’t the monkeys just swim off the island? And it’s not exactly far to land – they could probably jump it) to the African wild dogs.

Well by this time it was pushing three thirty and the animals were waiting on their last meal for the day. So African wild dogs: pacing the side of their cage, waiting for the keeper. Cheetah? Doing the same. Tiger? Likewise. Now I’ve been playing a bit of Far Cry lately and tell you what, if I ever saw a hungry tiger waiting for me to step into its cage, I’d be gone faster than beer at a geologists’ party.

As you may anticipate, animals walking around bushes on the far side of their cages hardly makes for the best photo opportunity. However, some animals were more willing to share their photogenic sides with us, such as these giraffes;

We saw so many giraffes that I was actually kind of disappointed. I wanted to see a zebra. I didn’t see one. NOT ONE. No otters either. They’d apparently all gone to bed for the day; in fact the zebras had been stabled by time we got around to them. The rhino and her youngster were kinder;

Did you know, and I don’t have any relevant photos for this, that a premier of South Australia once proposed that we let chimpanzees and anacondas into the wild for hunting purposes? Great idea, right? The thing about Australia is that whatever animals we introduce here do a hundred times better than the animals we already have. With estimated populations of feral species including one million camels, 7.2 million foxes, 18 million cats, 23 million pigs, 200 million rabbits (the peak for rabbits was 70 years after their introduction to the country, in 1920, where their population reached an estimated ten billion.)

So thank goodness anacondas were never introduced to the country. Can you imagine 10 million anacondas slithering around the place? I guess at least they would keep down the feral pig and goat populations.

My idea about conservation at large is that yes, every animal introduced here does incredibly well. Even the cane toad, which isn’t nearly as prolific in its native Central and South America as it is in Australia. We could take advantage of this by disposing of zoos altogether and simply releasing endangered animals into the wild. Black rhinos, white rhinos, any sort of tiger, snow leopards, hell, I bet if you could bring a single dodo back to life, within fifty years it would have found some way to multiply itself into the thousands.

For now, until this obviously brilliant campaign takes off, we’re left with zoo pictures. 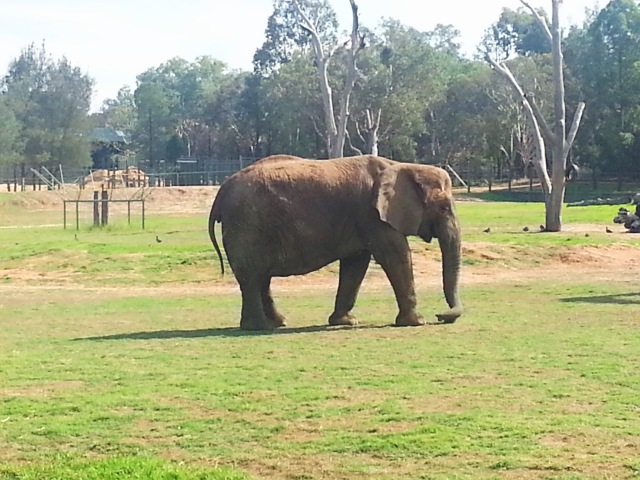 Big elands! I mean elephants. Elephants, yes. This guy was digging up clumps of dirt and grass and then eating them. For salt? Or just because it could?

It was Ryan who eventually conquered his rabid fear of elephants and thus allowed me to take this pic;

Hey, that’s cheating! That poor elephant is half buried in the ground!

We were really pressing for time now. We had ceased to see other visitors in the zoo, aside from an elderly couple whom appeared to be lost. Instead we were caught up by two zoo keepers busy dishing out fruit to the herbivores and goats to the rest. We were in perfect time to see these siamang being fed. The little one was just gorgeous. I managed to take a fairly not bad video of them all, will put it up later. The siamang were definitely my favourite animals of the day, if only because we saw so much of their wonderful interaction.

There’s mum up the top eating her fruit, while baby clings to dad, hoping for a piggy back.

We skipped the lions, the wildebeest, the wild bees and headed straight for the zebras. Of course, the zebras went to bed early and we missed them. Our consolation was watching this lovely lake, and the hundreds of birds including ibises and swamp hens and cockatoos flocking around it;

While we were admiring the lake, a car rumbled past us, the first in a while. We noticed it was the zoo keepers. No problem, we thought, we still had half an hour until closing time. We made haste around the last of the large enclosures, closing in on the Galapagos tortoises. The tortoises all made an effort to say what we thought was hello, but in retrospect was probably “get the hell out while you still can”. 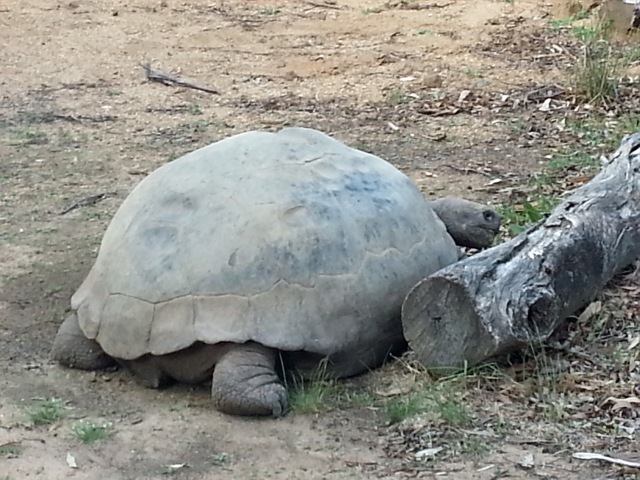 That was the last exhibit, and with a farewell to the animals, we made our way to the gates to the parking lot… where we were greeted by this;

We were locked in the zoo.

We could raise the boom gate, but that was it. The zoo keepers who had driven past us numerous times in the past half hour hadn’t bothered to tell us to hurry, or offered a lift, or left the gate open, or attached a bit of rope to the top so we might scale it.

Well then. Noticing canvas to one side, we struck through the bush and arrived in an altogether sinister circle of tents.

While the tents were perfectly laid out, there was no one around. Not a soul. It took us a minute to figure out we had probably ended up in the ecology/ learning centre. This wasn’t getting us any further out of the zoo. Ryan and I knew we only had a matter of time before the twenty foot high Jurassic Park style gates were locked and we were shut into the zoo for the night. Or forever. Or at least until we figured out to ring the police.

We pressed into the dense scrub at the back of the tents, spying an impressive snake hole at the back of one tent before letting ourselves past the fence and through a gully,

and raced back to the parking lot. Here’s where I run out of pictures, because the parking lot was emptying fast. It was still ten to five. We piled into the car and burnt rubber after the employees filing out through a side gate in the now closed main gates. The employee car ahead of us entered a code into a box to open the side gate, and we stuck so close to their tail, with a backwards glance they surely would have seen the desperate whites of our eyes.

We wasted no more time in Dubbo. Obviously it was a place which wanted to trap us and force us to hunt lions for survival. With a hop and a squeal of tyres we were back on the road to Bathurst, where sanity lay.

And that was our trip to the zoo. I somewhat regret not taking advantage of our situation and spending the night there, as it would have made a decent survival story, and I probably would have ridden/ eaten a zebra.