No Mud, No Life

…I just remembered I had a game of Spider Solitaire open that I was badly losing. I was reminded of it by opening the game again and being greeted by my dismal failure.

Hey! Don’t get down about that, because much better than silly, silly, stupid stupid bad Spider Solitaire is this: 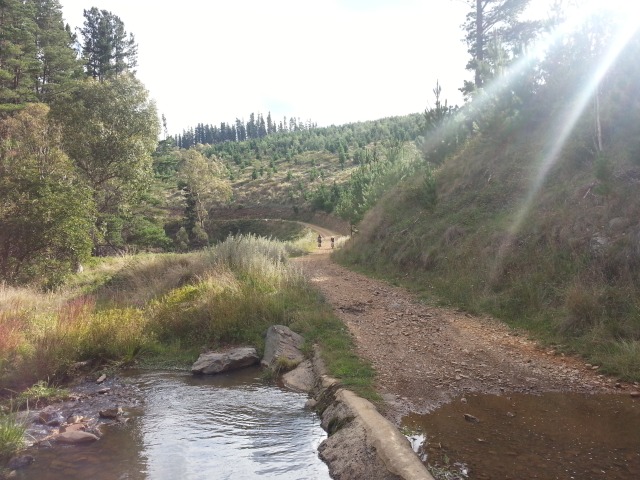 That’s right! Welcome to Sunny Corner, which is here, about twenty minutes’ drive east of Bathurst. Made up of a good amount of state forest, low mountains and several small townships, Sunny Corner is our new favourite place to explore and ride.

On this particular Sunday (I have to apologise here because it was a long time ago, actually), four of us set out for the ride. Shane, in his Lycra, Mule with his +3 beard of wheelies, Ryan and I. We started from one of the many parking areas along the main road to the Sunny Corner township, unpacked our bags and headed downhill. It had rained a few days before, so there were plenty of puddles to test our mettle;

Well okay, that’s a pond. Mule is acting as size comparison… although he may not be aware he’s in the photo.

Following forestry roads as the whim took us, we wound through the dense coverage of trees and eventually made our way down to the creek which runs the course of the forest. 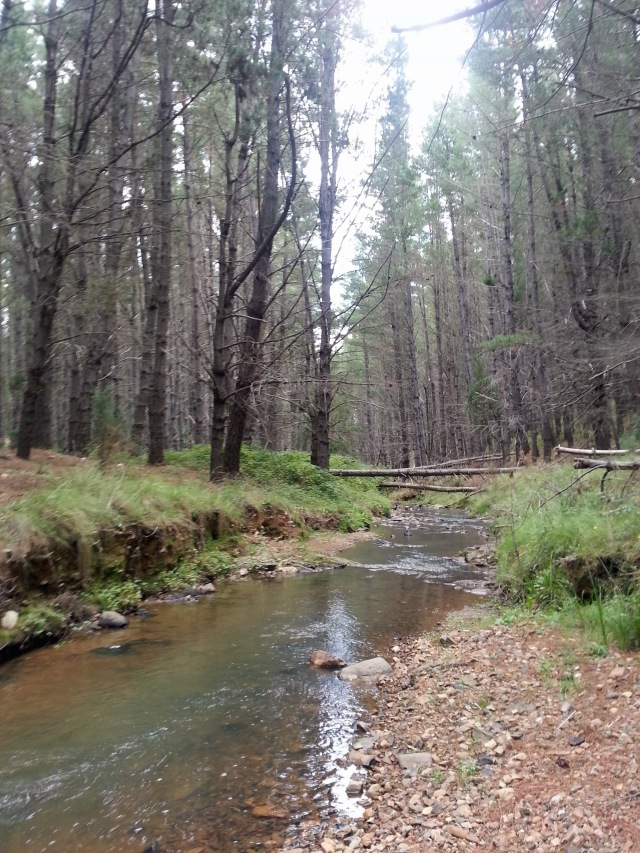 Shane, who rode through the creek at full tilt without coming off, was greeted by this cheer from Ryan and Mule; 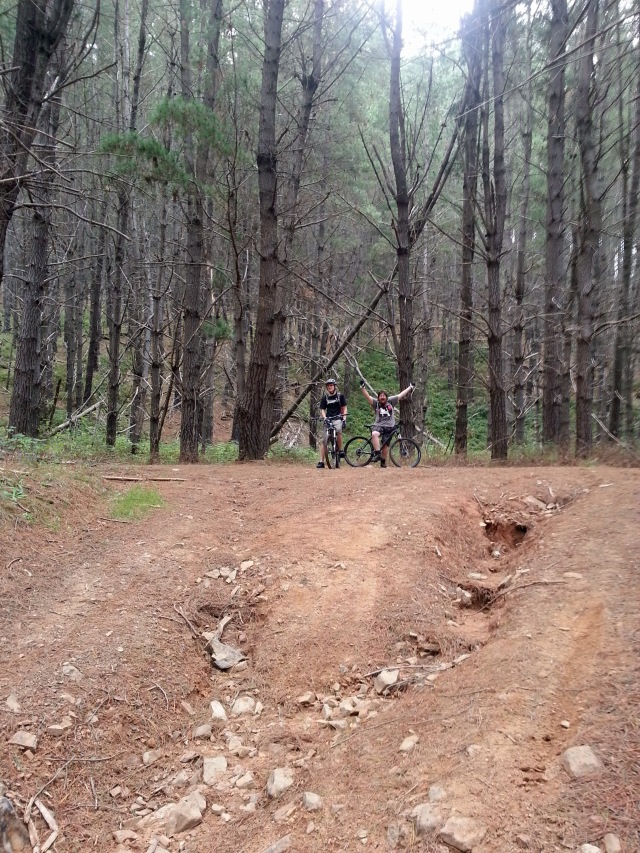 While Ryan and Shane discussed Ryan’s lack of cheering enthusiasm, Mule and I headed further down the road parallel to the creek. Here we found a puddle about four metres square where water had filled the ruts left by years of 4WDs. Mule wisely skirted the puddle; I rode through and quickly learnt that the six inches of water disguised two foot of mud.

No sooner had I stepped off and walked through the mud to the other side then lo and behold, Shane came speeding towards us. He shouted from his bike, “How’s the puddle?”

“It’s fine,” I told him, while Mule backed me up, “very shallow. You’ll cross it no worries.”

Well. I didn’t think he would listen.

He almost made it. Almost. He got through the water and the mud and then caught his front tyre on the steep, solid rise on the far side, his inertia dragging his bike out of the puddle, where he threw the bike aside, performed an admirable 360 degree dancer’s pivot, and crashed into the mud.

The result was picture of the day 92: 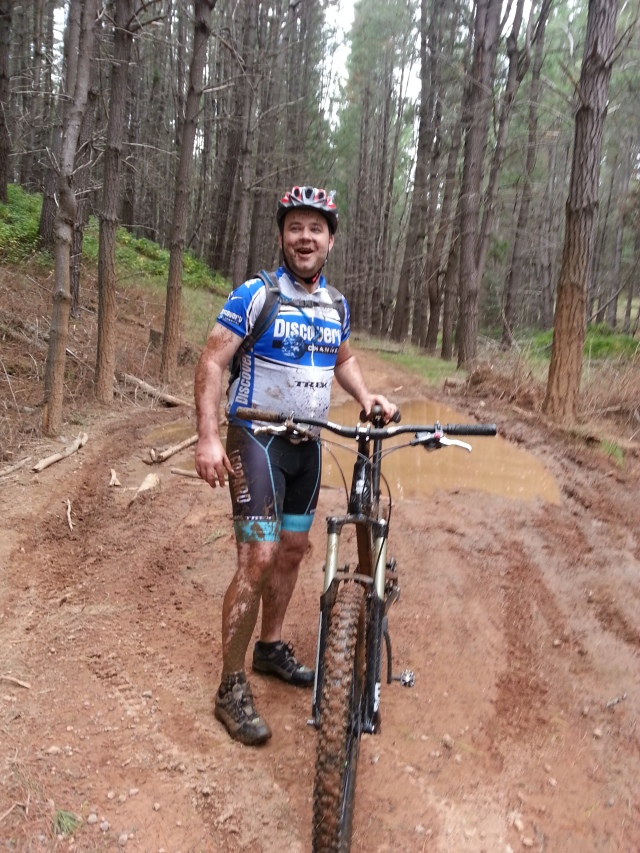 If you look hard to the right you can probably see the imprint of his body in the mud.

Shane took it well, and after we failed to coax Ryan to make the same mistake, all four of us headed uphill to sunnier climes. The washouts and loose gravel and dirt certainly make for an interesting climb. Ryan and Shane at least were happy to work on their technical skills; I was just happy to make it to the top. And alas, the bottom; 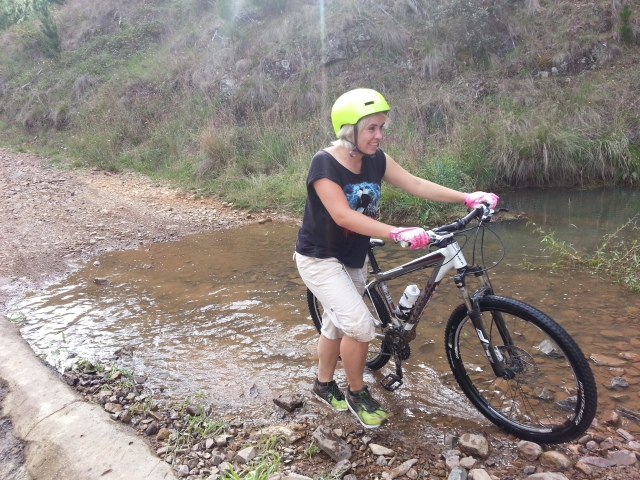 The parking lot is visible here behind the pines to the left. The ride between this hill and the parking lot is deceptively flat. By which I mean it isn’t flat at all whatsoever. It’s a long drop followed by a short, steep rise. Ready for it, boys? 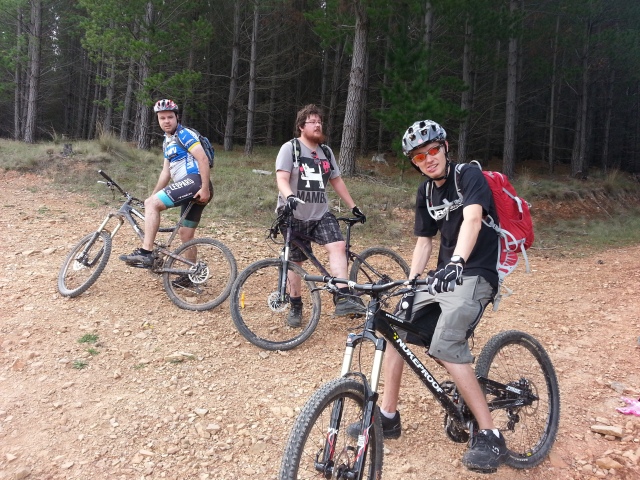 And that was our first ride around the lovely Sunny Corner. Unlike Kinross, Sunny Corner has a friendly, open feel. It’s very natural and very beautiful, full of little hidden areas, with kangaroos and wallabies and parrots rather than Kinross’s wild dogs, and with a winding creek rather than overturned cars. More on Sunny Corner later!

For now, I’m considering adding a page of rides that we’ve done, including links to Google Maps and Strava so that anyone reading and lucky enough to be in the area has a guide to some of the better rides around Bathurst. One thing I have noticed since starting this blog is the deficiency in information for mountain bike riders. Hopefully now that the book launch is over and moving is over, I’ll be able to get into blogging regularly, and put some really solid information out there for the riding community.

Well, that’s the plan! Until next time!