On Sunday the weather was genial and I had every excuse to get out of the house. Sax was keen for a hike, so together we headed out to Adelong Falls. To hell with the snakes!

Once upon a time, gold was mined from Adelong Falls, and the town boomed. Now the rush is over, what gold is left is deemed not worth extraction, the town is small, and the Falls are an excellent way to spend a day.

Having spent most of winter here, I was a little pensive about how I would find it in the middle of summer. Particularly for snakes. >_<; However, upon arrival, the carpark was pleasantly busy (four or five cars) and there were several small groups of people going through the ruins, and across the river below. 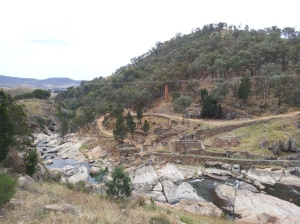 So without further excuses, Sax and I made the steep descent into the valley, for epic adventure time! Well, sort of. Usually I’d give us a challenge, like go from one end to the other (a total time of about three hours, with plenty of climbing at wild end and opportunities to swim at the town end), or to refrain from using the bridges to cross the water. However, I was keen for a ride, and I didn’t want to spend more than an hour or so at the Falls. Next time, definitely doing to No Path Challenge. Should be tough!

Strewn along the lower bank are the ruins of the gold mine. The Falls are under constant restoration, so parts of the ruins look almost new, while some have hardly changed since the day they were built. 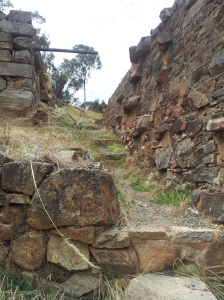 Not sure what that last one is. It was about 20cm tall and fitted with bits of wood in either side. Headed down to wild end, I met a group of students from Wagga. They were looking for a path down to the taller falls. I gave them a way, and they ended up following Sax and I. Although we aren’t known for taking the quickest or easiest path…

One of the higher falls. Because of the rocks, the sound is enormous. The water is lower at the moment than it had been through winter, as it isn’t fed by Blowering Dam, and the flow is naturally modelled on our rainfall. This made it much easier to cross in places, and plus the water was warm. Sax was happy. 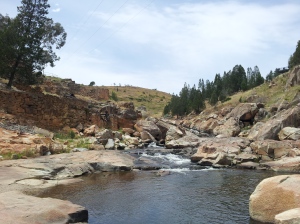 I met the students again above the next waterfalls. I didn’t want to go further – the only way down is via dense vegetation and a steep drop on one side, or dense vegetation and a high climb on the other. If you’ve ever carried a dog across a line of boulders with blackberries and a steep drop on either side, you’ll know why I stopped! Or tried to coax a dog through a dense crop of trees during snake season. Hmm…

I gave the students general direction in navigating the next few falls, and headed back upriver. Next thing I knew, they were behind me. They stopped for a swim and I kept going. No stopping! Just climbing! All the climbing all the time!

I stopped in Tumut for lunch before taking the bike out. To the aerodrome! Whee! I hooked around the River Walk and connecting park, to see the geese;

then continued out towards Bombowlee and Brungle to the aerodrome, where I spied this magnificent beast of a helicopter. Stowed away quite close to the fence marked AUTHORISED PERSONNEL ONLY in the Rural Fire Service private yard. 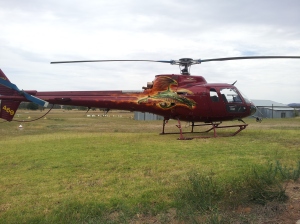 Fighting the wind on the way back into town, there was only one thing I wanted: a swim. I grabbed Sax, forgot the towels, the sunscreen and anything else which may have been of use to us, and drove out to the Junction. The parking lot was crowded, the banks not so much. I had the unique pleasure of swimming in the river while my old classmates dawdled on the bank and complained about the temperature.

We stayed long enough to cool down. And that was my country triathlon – canyoning, riding and swimming. A beautiful way to get out of the house on a Sunday afternoon.