After a hard morning spent playing Arkham Asylum on the Playstation, Ryan finally pulled into town and it was time to hit the river!

It was a beautiful, cloudless, boiling day. We grabbed the body boards, the towels and the dog, and drove the short distance out to Little River. There were a few other swimmers, and people exploring from the cabins across the water, but we had the rapids and downriver to ourselves. Ryan and I took it in turns cruising down the rapids on boards while the other stood downstream to field Sax when he invariably jumped to the rescue. 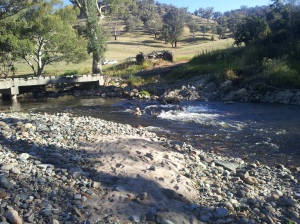 To keep himself occupied, Sax found a stick. Sax loves sticks. I’ve seen Sax throw himself over ledges of untold heights after sticks, into winter rivers, even into swamps. Unfortunately it doesn’t have to be a stick thrown by me; anything moving at speed above his head will do. He’s essentially mobile ground defence for airborne missiles. So when Sax had this stick, we had this idea… 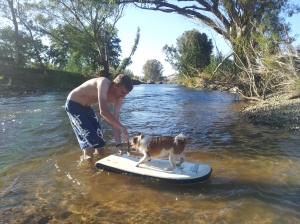 Put the stick on the body board, and what do you get? Sax surfing! After a little trial and error, we managed to get him into deeper water.

From here Captain Sax cruised downriver (with both Ryan and I holding onto him, of course!). Only on our return upriver did our ship meet disaster – namely my being too short to keep hold of the board and keep my head above water. I abandoned ship for the shore, and Sax lost his grip on the stick. I went to stick rescue, and Sax went to my rescue. Of course this only necessitated Sax’s rescue, and he made it to shore none the worse while Ryan and I dragged ourselves to land sodden and beat!

But not to mind. Soon Sax had found a stick he was sure was safe from the body board.

Not a bad way at all to spend a Saturday afternoon. 😉

Stellar Lasers is currently writing her PhD on Pokemon Physiology. To cover travel costs, she also writes articles for the Sims Big Brother Challenge. Her one weakness is waffles.
View all posts by Stellar Lasers →
This entry was posted in Adventure, Photo a Day, Swimming and tagged dog, little river, sax, surfing, tumut. Bookmark the permalink.